Daniel (“Dan”) Cooper has been practicing law since 1990. Dan has spent his career as a litigator, representing both businesses and individuals in various types of cases including personal injury and wrongful death cases, automobile and trucking accidents, products liability, premises liability, construction and building cases, property disputes, professional negligence and malpractice, insurance coverage, and insurance bad faith. Dan is a trial lawyer, having tried numerous cases in state and federal court. Dan has also represented clients on appeals before the Supreme Court of Appeals of West Virginia and the federal Fourth Circuit Court of Appeals. Dan’s practice is served well by his energetic and thoughtful approach to legal issues, his ability to provide clients with a candid and honest assessment of their legal concerns, and his zealous advocacy.
In addition to his practice as a lawyer, Dan also serves the legal community as a mediator. His success in mediation is a product of his breadth of experience in litigation as an advocate for individuals and businesses in both prosecution and defense of legal claims, and his work on behalf of clients in trial, arbitration, and mediation settings.

In addition to his work for Cooper Law Offices, Dan works for the City of Bridgeport, West Virginia, as municipal judge.

After his graduation from law school in 1990, Dan joined Steptoe & Johnson, PLLC, where he served the firm’s litigation and insurance clients until 2007, when he started Cooper Law Offices, PLLC.
Dan is admitted to practice before all West Virginia federal and state courts, including the Supreme Court of Appeals of West Virginia, the United States District Court for the Northern District of West Virginia, the United States District Court for the Southern District of West Virginia and the Fourth Circuit Court of Appeals. Dan is a member of the West Virginia State Bar, where he serves on the Alternative Dispute Resolution Committee; the Harrison County Bar Association; and the American Association for Justice. Dan is honored to have an AV – Preeminent rating with Martindale-Hubbell, which means that he has been deemed to have very high professional ethics and preeminent legal ability. In addition, Dan is recognized in The Best Lawyers in America in the fields of insurance law and litigation, a recognition that he has received annually since 2009. Dan is also recognized by Super Lawyers in the insurance law and litigation areas, an honor he has received annually since 2009.

Dan Cooper has achieved a listing in Best Lawyers in America in fields of ionsurance and litigation each year since 2009.

Martindale-Hubble, a peer review rating process based on the anonymous assessments by lawyers and judges, has given Dan Cooper the highest rating available for lawyers – AV Preeminent. The rating indicates that Dan Cooper has been given a score awarded only to those lawyers with the highest ethical standards and professional ability.

Dan Cooper is listed in Best Lawyers in America in the fields of Insurance Law and Personal Injury Litigation – Plaintiffs, an honor that he has received each year since 2007. Best Lawyers is the oldest and most respected lawyer ranking service in the world. For 40 years, Best Lawyers has assisted those in need of legal services to identify the lawyers best qualiﬁed to represent them in distant jurisdictions or unfamiliar specialties. Lawyers who are nominated for consideration are voted on by currently recognized Best Lawyers working in the same practice area and located in the same geographic region. Our awards and recognitions are based purely on the feedback we receive from these top lawyers. Those who receive high peer reviews undergo a thorough verification process to make sure they are currently still in private practice. Only then can these top lawyers be recognized by Best Lawyers. 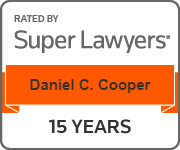 Dan Cooper has been selected to the West Virginia Super Lawyers list each year since 2009. Each year, no more than five percent of the lawyers in the state are selected by the research team at Super Lawyers to receive this honor. Super Lawyers, part of Thomson Reuters, is a rating service of outstanding lawyers from more than 70 practice areas who have attained a high degree of peer recognition and professional achievement. The annual selections are made using a patented multiphase process that includes a statewide survey of lawyers, an independent research evaluation of candidates and peer reviews by practice area. The result is a credible, comprehensive and diverse listing of exceptional attorneys. For more information about Super Lawyers, visit SuperLawyers.com.

Get a free consultation.